Another short advenuture in Bhutan incluidnall cultural activities and visit of Monastery including Tiger's nest. We will also do sightseeing in paro, Thimpu, Punakha and Wangdue Phodrang.

Day 01: Arrive Paro and transfer to Hotel
The first thing you will notice as you disembark is the transparent purity of air and the absence of noise. The Paro valley has kept its bucolic nature inspite of the airport and the existence of development projects. Fields, brown or green depending on the season, cover most of the valley floor, while hamlets and isolated farms dot the countryside. The houses of Paro valley are considered to be among the most beautiful in the country. Paro is believed to be one of the first valleys to have received the imprint of Buddhism.Check into Hotel. Afternoon: Visit the National Museum (Ta-Dzong). Once the watchtower for the Rinpung Dzong, it was converted into the National Museum in 1968. The museum stands on a promontory overlooking the Paro valley in all its glory. Visit the Paro Rinpung Dzong. A flagstone path rises gradually from a beautiful wooden bridge with shingle roofing and abutted by two guardhouses, to the Dzong. Today, the Dzong is the seat of the district administration as well as the home for the monastic school. The central tower (Utse) of the Dzong, with its superb woodwork, is one of the most beautiful in the nation. The Dzong was built in 1645 A.D.

Day 02: Paro Sightseeing
Morning: Drive to Drugyal Dzong (a ruined fortress – 16 km away from Paro town). The Dzong, although in ruins, holds great historical significance. It was from this fortress that the Bhutanese repelled many Tibetan invasions. The name means the victorious Bhutanese. This spot offers a magnificent vista of Mount Chomolhari, “Mountain of Goddess” (7329 m). Visit a typical Bhutanese farmhouse on the way back. A short distance south of the road is Kyichu Lhakhang. This temple is said to have been built in 659 by King Songtsen Gampo of Tibet. It holds down the left foot of an ogress whose body is so large that it covers Bhutan and most of eastern Tibet. Evening: Tea at the hotel and drive for two hours (65 km) to reach the capital city of Thimphu.

Day 03: Thimphu Sightseeing
Thimphu lies in a wooded valley, sprawling up a hillside on the West Bank of the Thimphu Chhu [Chhu means River]. Thimphu is unlike any otherworld capital. Small and secluded the city is quiet and there are never the traffic jams familiar in other Asian Capitals. It is often said that Thimphu is the only world capital without traffic lights. Thimphu’s main shopping street is a delight not so much for what you can buy there, but for the picturesqueness of the architecture and national costume. Beautiful weaves in wool, silk and cotton, basketwork, silver jewellery, thangkas and other traditional crafts of the Kingdom are available in various Handicraft Emporiums. Morning:Visit the Memorial Chorten, a huge stupa built in memory of the third King who reigned from 1952-1972. Visit the National Library where ancient manuscripts are preserved. Visit the Weekend market where vendors from throughout the region arrive on Friday afternoon and remain till Sunday. Here you will find indigenous goods, handicrafts, locally produced goods, etc. Afternoon:Visit Semtokha Dzong. This is the oldest fortress in Bhutan, built in 1629 A.D. by Shabdrung Ngawang Namgyal. It also houses the largest monastic schools in the country. Visit Tashichho Dzong – the main secretariat building. It is from here that the King and other prominent civil servants run the country. The Head Abbot and the central monastic body also reside here during the summer. Visit Pangri Zampa Monastery, situated just beyond Dechencholing Palace (5 km. from Thimphu). This temple was the first residence of Shabdrung Ngawang Namgyal when he arrived in Bhutan in 1616 A.D. Ngawang Chogyel, the great ancestor of the Shabdrung, built it during the first quarter of the 16th century.

Day 04: Thimphu ~ Punakha ~ Wangdue Phodrang
After breakfast transfer to Punakha/Wangdue. En-route stop at Dochula Pass (3150 m), 30 km from Thimphu, for tea and biscuits and enjoy a view of the Eastern Himalayan Mountains. From Dochula to Wangdue, it’s another two hours drive. Wangdue Phodrang Dzong is perched on a spur at the confluence of 02 rivers. The position of the Dzong is remarkable as it completely covers the spur and commands an impressive view over both the north-south and east-west roads. The main road climbs the length of the spur and on the left, across the river, comes the first glimpse of the picturesque village of Rinchengang whose inhabitants are celebrated stonemasons. After lunch in Lobesa, visit the Punakha Dzong. This is the winter residence of Bhutan’s spiritual leader, the Head Abbot, and the Central Monastic Body. The Dzong is built between two rivers known as “Phochu” (Male River) and “Mochu” (Female River).Check into Hotel.

Day 05: Wangdue Phodrang ~ Thimphu
After breakfast drive to Metshina. On a hillock in the center of the valley below Metshina is Chimi Lhakhang (Fertility Monastery), built by lama Drukpa Kunley in 1499. He subdued the demoness of the Dochu la with his ‘magic thunderbolt of wisdom.’ A wooden effigy of the Lamas thunderbolt is preserved in the Lhakhang, and childless women go to the temple to receive a wang (blessing) from the saint. It’s a 20-minute walk across the rice fields from the road at Sopsokha to the temple. The trail leads across rice fields to the tiny settlement of Pana. There are very few monks at the temple which is surrounded by a row of prayer wheels and some very beautiful slate carvings. Continue drive to Thimphu across the Dochu la pass. Afternoon free for shopping.

Day 06: Thimphu ~ Paro [Excursion to Taktsang Monastery]
Transfer to Paro for 03 hrs hike to the Taktsang Monastery. Taktsang is the most famous of all Bhutanese monasteries. It is perched on the side of a cliff 900 m above the floor of the Paro valley, where the only sounds are the murmurs of the wind, and water and the chanting of the monks. The name Taktsang means ‘Tigers Nest’; the Guru is said to have flown on the back of a tigress to the site of the monastery where he meditated in a cave for three months. The monastery itself is closed to tourists except by special permit. However the one-hour walk to the viewpoint, where there is a small wooden teahouse provides a close-up view of the monastery.

Day 07: Paro Departure
We will transfer to Paro airport for the departure flight.

Dress code while entering monasteries and temples
Shirt (either half or full sleeve)
Full pants/long skirts
Any type of shoes with socks
No Hats, No Umbrella, No Slippers, No t-shirts, No short skirt and No half-pants
Photographs allowed in the courtyard only 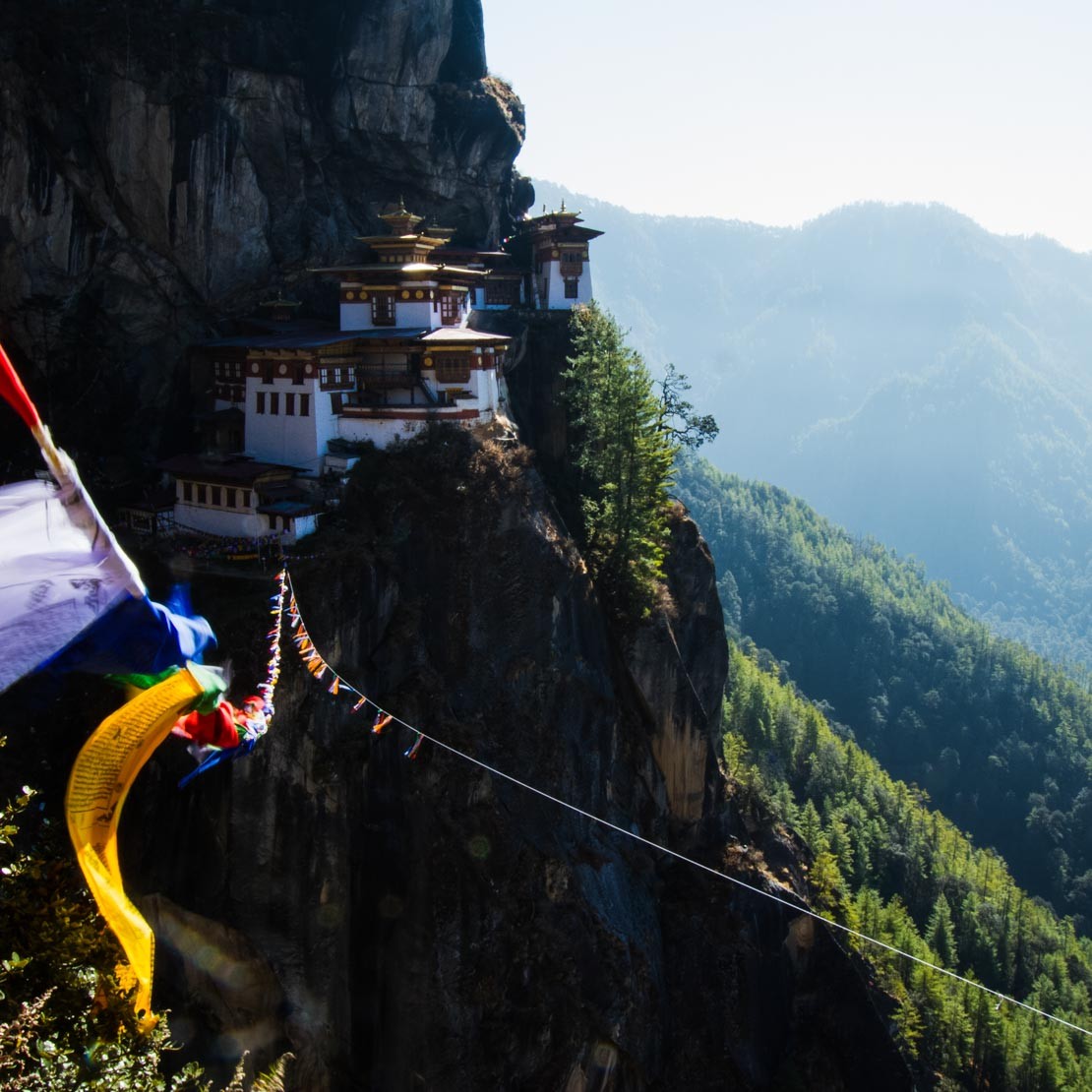